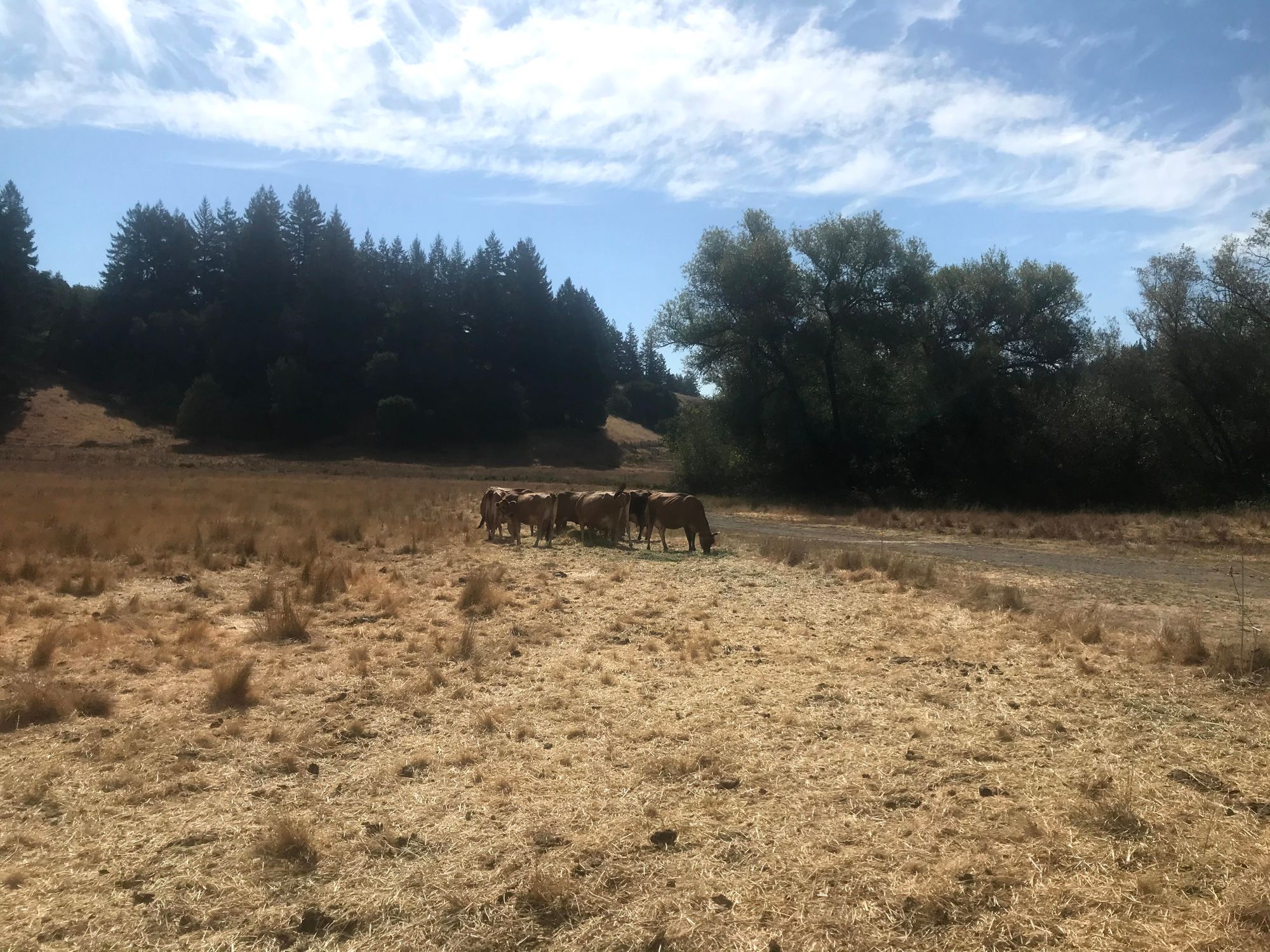 How do we continue to ensure a reliable food supply to a growing population in a climate-changed future? This question is at the heart of Ted Nordhaus’ recent piece in Jacobin magazine. Nordhaus is an author and director of research at The Breakthrough Institute. He takes aim at organic farming, “slow food” and small scale agriculture, yet these are essential ingredients in the climate solutions mix we need that also advance biodiversity, equity, community resilience, and human health. According to Nordhaus, Big Ag and cheap food are the answers to the question “what should define the food system of the future?” But these are the causes of the problems of today’s food system.

Nordhaus frames his argument around Alice Waters, a central figure in the slow food movement in the US, and uses her as a strawwoman to conflate the small scale, organic agriculture movement with elitism and inaccessibility to ‘the masses.’ He then goes on to make bigger and bolder claims that “slow food really does little to ensure a healthy, moral, or sustainable food system, nor one that treats farm and food-processing labor any better. In fact, small farms are as likely and maybe more likely to treat workers poorly, and often rely on unpaid family labor to remain productive.” This is followed by a statement that “the primary reason that Big Ag in places like the United States accounts for so much environmental harm is because it accounts for the vast majority of agricultural output and land use.”

But it's not just the amount of land use that creates the environmental harm from Big Ag. Conventional produce, per kilocalorie of food, has an extremely high environmental footprint due primarily to the production of nitrogen fertilizer and petrochemical pesticides and herbicides. Producing these inputs is incredibly energy- and greenhouse gas-intensive, and their application leads to runoff and local water pollution. This high-input farming model also relies heavily on tillage, which destroys life in the soil. Conventional farming does not come with any environmental benefits of note.

By contrast regenerative and organic systems have many environmental benefits in addition to reduced harm from not using poisonous chemicals- building and maintaining soil health, sequestering carbon and holding more water in the soil, providing habitat for native birds, insects and pollinators, reducing greenhouse gas emissions from soil, and reducing erosion.

Nordhaus contends that small farms are “undercapitalized, unproductive, labor intensive and technology poor” and can’t feed the world. In fact, almost 60% of crops produced globally for human consumption are grown by farmers on less than 20 ha (50 acres), feeding their communities rather than feeding the world economic engine. The ‘Our World in Data’ article linked above defines ‘smallholder’ farmers as those farming 2 ha (5 acres) or less, but in reality in countries like the US, farming 50 acres or less is considered ‘small scale farming’ that is not in the Big, Industrialized Ag category.

It’s not only size of operations that matters in food production systems, it's what is happening on the land that’s really important. Many small farms are demonstrating that we can in fact achieve multiple goals on a well managed piece of land: produce food for human consumption, steward the natural environment and mitigate and adapt to climate change through sequestering carbon in the soil. Indigenous people have known these truths for millennia.

To his point about small farms being undercapitalized, yes, indeed small and organic farming systems are vastly under-resourced but this is because they are often trapped in a low resource situation by the political-economic dynamics of the current food system. It’s not just small farms that struggle economically; 96% of farmers in the US rely on off-farm income to survive financially (off-farm income makes up on average 82% of farm household income). There is a need across the board for farm policy to shift toward supporting ecological farming by valuing ecosystem services and expanding proven programs like EQIP and CSP if farming is to remain a viable career path for the future.

Nordhaus critiques organic farming as less productive and lower yielding than conventional (chemical-intensive) farming. However, he uses the wrong metric, namely just focusing on yield only. In the US, for example, organic farming trials are increasingly demonstrating systems that are more productive than conventional farming operations over time, produce fewer carbon emissions, and, crucially, produce yields 40% higher in times of drought (see another study on long-term organic comparison trials across the US here, and a summary of the Rodale Institute 30-year organic farming trials here).  Unsurprisingly, soil health is restored and increases in regeneratively managed lands, while it declines in conventional systems that become increasingly dependent on more and more fertilizer and pesticides to sustain yields over time. This is not efficiency, this is chemical dependency.

Other scientific articles have found that existing yield gaps between organic and conventional crops close over time as soil health benefits kick in with organic systems and conventional systems reveal a lack of resilience to a changing climate. Furthermore, studies of organic vs. conventional typically compare crops grown in monoculture systems, whereas many of the highest-yielding organic systems use polycultures, yielding well for multiple crops as synergies emerge when crops shade each other, share nutrients, and help break up pest-disease cycles. Thus their net productivity can be larger than a single crop yield – not to forget all the benefits of healthy soils, pest control, and water retention.

Nordhaus even cites research that doesn’t support his argument on a closer read. The article he cites stating lower yields for organic farming in a global meta-analysis goes on to say that nevertheless, organic farming practices are necessary to build a sustainable food future. Yield alone is not the only metric of importance; there are many economic, social and environmental benefits of organic agriculture that make it worth it. In the authors’ words, “the factors limiting organic yields need to be more fully understood, alongside assessments of the many social, environmental and economic benefits of organic farming systems.” Another recent meta-analysis of the yield gap between conventional and organic farming calls for a reframing of the common but misguided question “can organic feed the world?” asking instead, “how can organic farming better contribute to feeding the world?” given its many benefits yet substantial disadvantages in terms of research, funding and subsidies compared to conventional farming.

Even while singing the praises of cheap food, Nordhaus is silent on the growing hunger crisis. While Big Ag takes over in countries across the globe through ongoing Green Revolution projects, hunger is on the rise globally. This is despite the fact that the global food system over-produces the calories needed by the current population. Green Revolution projects are spreading despite increasing evidence that they do not achieve the goals they set out to accomplish: reducing hunger and empowering farming communities. We need to be focused on feeding our communities through more sustainable farming systems, not “feeding the world,” argues Raj Patel in his recent Scientific American piece “Agroecology is the solution to world hunger”.

There is truth in Nordhaus’ call that food should be more affordable and accessible and agricultural workers should have better working conditions. But he is effectively arguing that we should all be eating cheap, dirty, chemical-laden, highly processed foods, at great cost to the environment and our own health. This argument is very dangerous. It shouldn’t be a race to the bottom with cheap, mass produced food, it should be an expansion of the clean healthy food movement for all that we are working towards. And in fact, there is a vibrant community of food justice organizations, food sovereignty advocates, and urban farmers who are doing just that: They are actively promoting a return to growing and preparing culturally relevant foods, not mass-produced commodities, as the best pathway to restorative justice, empowerment, and liberation for low income communities and food service workers.

Nordhaus emphasizes the need to keep food cheap and somehow pay agricultural workers more. How does he propose to do this? It’s unclear. His claim that food needs to be “cheaper and more abundant” flies in the face of a growing body of evidence of the problems with cheap food. ‘Cheap food’ comes at greater and greater societal and environmental cost, as conventional-turned-organic farmer Bob Quinn points out in his book “Grain By Grain,” excerpted here:

The food Americans eat is cheap but much of it is ‘value subtracted’ nutritionally. Add rising rates of chronic diseases such as diabetes. Factor in farmers losing their land, and rural communities emptying. "Then there are all the other poorly paid people along the supply chain: fast-food workers, processing plant workers, grocery store clerks," and then add in environmental costs."We're not really saving money. We're just sticking ourselves and our kids with a hefty tab to pay down the road,'" he wrote. "And meanwhile, we're pouring our local resources into the pockets of a few wealthy multinationals who make the big money in the food system, absorbing their costs in the form of poor health, pollution, poverty and the billions of taxpayer dollars spent trying to fix these problems."

The problems of our food system relate to 1) distribution and waste, 2)  incentivizing the production of feed for animals over nutritious food for humans, 3) exploitation of farm workers, and 4) environmental destruction from current production methods that are killing soil life, driving deforestation and carbon emissions, and threatening biodiversity. None of these problems will get better by sticking with the industrialized, chemical-intensive, technology-dependent version of agriculture.

A better path would be to incentivize and fund research and training on sustainable, organic and regenerative farming systems that create healthier and safer working conditions and more nutritious food for people. For more details on “how to do this”, check out the recent Talking Feds podcast with farmer Leah Penniman, Senator Cory Booker, and scholar Michael Pollan. Or Raj Patel and Jim Goodman’s piece in @Jacbobin magazine, “A green new deal for agriculture.”

Everyone doesn’t need to become a small-scale farmer or home chef, but we certainly need more of these kinds of people to heal our planet and restore a better standard for human health. The small scale farms I’ve been privileged to learn from have upheld incredibly high standards for workforce development, treatment of farm workers, and empowerment of other local farmers. A diversity of experiments in farming systems and land stewardship are necessary in the face of ecological and social collapse. It’s not big ag vs. small/organic ag, it’s we need to pull together and support diversity of thought and innovation, incorporating both indigenous and modern earth- and human-sustaining practices to build a thriving, healthy and nourishing food system for us all.

Dr. Laney Siegner is Director of Academic Programs at Terra.do and Course Creator for the Climate Farm School. Her climate expertise focuses on sustainable food systems and climate change education.

Dr. Laney Siegner is Director of Academic Programs at Terra.do and Course Creator for the Climate Farm School. Her climate expertise focuses on sustainable food systems and climate change education.

Dr Debisi Araba, a recognized public policy and strategy specialist based in Africa, talks about his journey, the Africa Green Revolution Forum (AGRF), the challenges posed by COVID19, the realities of climate-smart agriculture, and what innovations we can expect in Africa.

The West Coast of the US is in an unprecedented drought, casting doubt as to how our agricultural systems can survive in the new normal of climate change. Regenerative small-scale farming is leading the way in resilience and innovation in farm jobs and food systems.